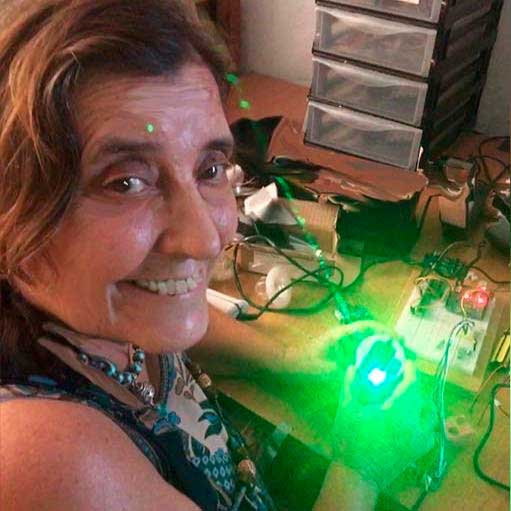 Artist, researcher of sound and light

MARYSOL GONZALEZ STERLING, is a self taught metaphysical artist, researcher of light and sound for healing, creator of instruments for consciousness with astrology, Iching, Mayan calendar. She continued Jose Arguelles work creating the TzloinTAO personalized dharma of the Noosphere. Has discovered the true octave of light and the reason we do not see auras, due to the eyes being attached to the sphenoid bone in the center of the cranium and she developed the way the cranium will change for future homo luminous. Started the first CranioSacral school in Spain 1987 and the Foundation SOLiris 2009.

Developed in 2000 the BiosonicFFT software for spectral analysis of the human voice for healing and now is developing bioLUXsonic for general public. In 2006 she healed from the strongest Leukemia form nuclear radiation with a non-comptible bone marrow transplant that changed blood DNA, and recovered miraculously with no side effects, due to her techniques with sound and light.

Now with her company LUXsoliris is creating biotechnology with an American scientists electrical engineer, physicist and biologist creating instruments for regeneration and healing, enhancing lost technology with Crystalaser and MagneticPlasma.